I have recently lost my warning signs for Hypoglycemia. Is it likely that they will return?

Very tight diabetic control is known to reduce Hypoglycemia awareness. A study carried out with the help of people who had lost their warning symptoms showed that when the participants kept their blood sugar above 4 mmol/L continuously for three months, avoiding hypos altogether, they experienced partial or complete restoration of warning symptoms. Do you think that your diabetes could be too tightly controlled? If so, it may be worth discussing this with your diabetes team and reducing your dose of insulin. 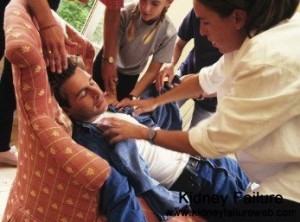 My father has had diabetes for 20 years. Recently he had what his doctor calls epileptic fits. Would you tell me how to help him and if there is a cure?

A bad hypo may bring on a fit and it is important to check your father’s blood glucose during an attack. If the glucose level is low, reducing his insulin should stop the fits. If the fits are not due to a low blood glucose level, it should be possible to control them by making sure he takes his epilepsy tablets regularly – ask his doctor for more details about these.

Many people ask about this as it is a great source of anxiety. The brain recovers quickly from a hypo and there is unlikely to be permanent damage, even after a severe attack with convulsions. Very prolonged hypoglycaemia can occur in someone with a tumour that produces insulin, and if a person is unconscious for days on end then the brain will not recover completely. This is not likely to occur in people with diabetes, in whom the insulin wears off after a few hours. However, there is some evidence that people who have very frequent hypos over many years may be at greater risk of dementia in later life.

If someone on insulin becomes very depressed, would they be able to commit suicide by taking an overdose of insulin?

Without dealing with the moral aspect of this question, we would strongly advise anyone against trying to commit suicide using insulin. It may sometimes lead to a painless death by Hypoglycemia but we know several cases where the person in question has lowered their blood sugar to dangerous levels for enough time to cause permanent brain damage but not to the level where it will lead to death. Most long-term brain injury units have one or two patients who are there because of a failed attempt to end their lives using insulin and this is a very sad situation for both the person concerned and for those close to them.